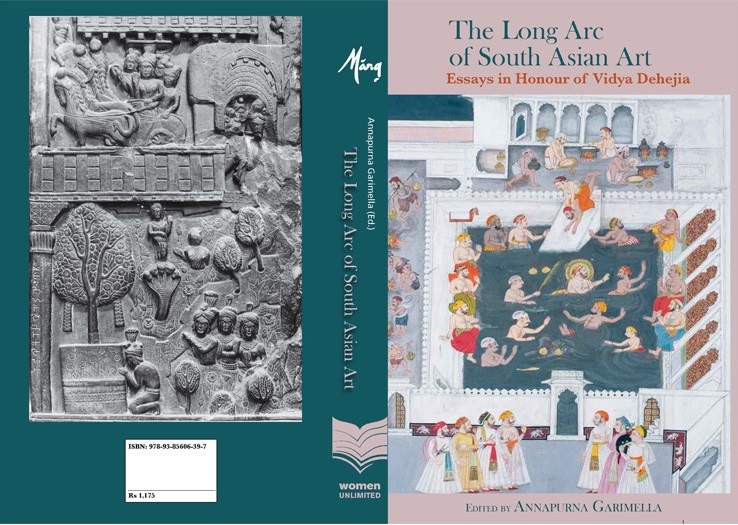 Essays in Honour of Vidya Dehejia

ABOUT THE BOOK: The long arc of art historical enquiry in the Indian subcontinent spans several centuries, and virtually all the arts, from temple architecture and sculpture to the striking of coins. This anthology of 22 essays, inspired by the pioneering work of art historian, curator and author, Vidya Dehejia, covers ancient Buddhist architecture, temple design and construction, Rajput and Mughal paintings and manuscripts, colonial-era photography, ornament, and museology, among others.

For the reader’s ease, this volume is divided into five thematic sections—Visual Narratives; India by Design; Making Architecture; Sharing, Intrusion, and Influence; and The Body in South Asian Art—each of which contains essays that explore the topic from a specific location, moment, medium and/or issue.

The authors traverse or further a field that Dehejia herself may have opened up for examination, moving beyond contemporary conceptual questions in art history and offering fascinating insights into, for example, Indo-Roman trade and the Dakshinapatha, or the Indic carvings of Quanzhou; the transformation of the body through ritual discipline, or physical attribution; colonial representations of the “native subject” and what they reveal about the colonising project.

The volume’s eclecticism extends to questions of materiality and agency; the politics and aesthetics of archaeological restoration; and the forming of divinity by human makers. The contributors, thus, not only refer to Dehejia’s vast art historical canvas, they situate their rich archival research and fieldwork such as to contribute to the very framing of conceptual issues that she raised; and to current scholarship in the field.

Published in association with The Marg Foundation, this beautiful book—which contains over a 100 images—is an introduction to Dehejia’s rich and expansive career, and the contributions here, all written by her past and current students, will indicate to readers that they have not fallen far from their teacher’s tree.

ABOUT THE EDITOR: Annapurna Garimella is an art historian, designer, and author. Her research focuses on late medieval Indic architecture, and the history and practices of vernacular visual and built cultures in India after Independence. She is the Managing Trustee of Art, Resources and Teaching Trust, a non-profit, and also heads Jackfruit Research and Design, an organisation with a specialised portfolio of design, research and curation. Her latest book is the co-edited Marg volume, The Contemporary Hindu Temple: Fragments for a History. She is presently working on Digesting the Past: The Discourse of Sacralised Architectural Renovation in Southern India (14th-17th centuries).

FROM THE LONG ARC OF SOUTH ASIAN ART: 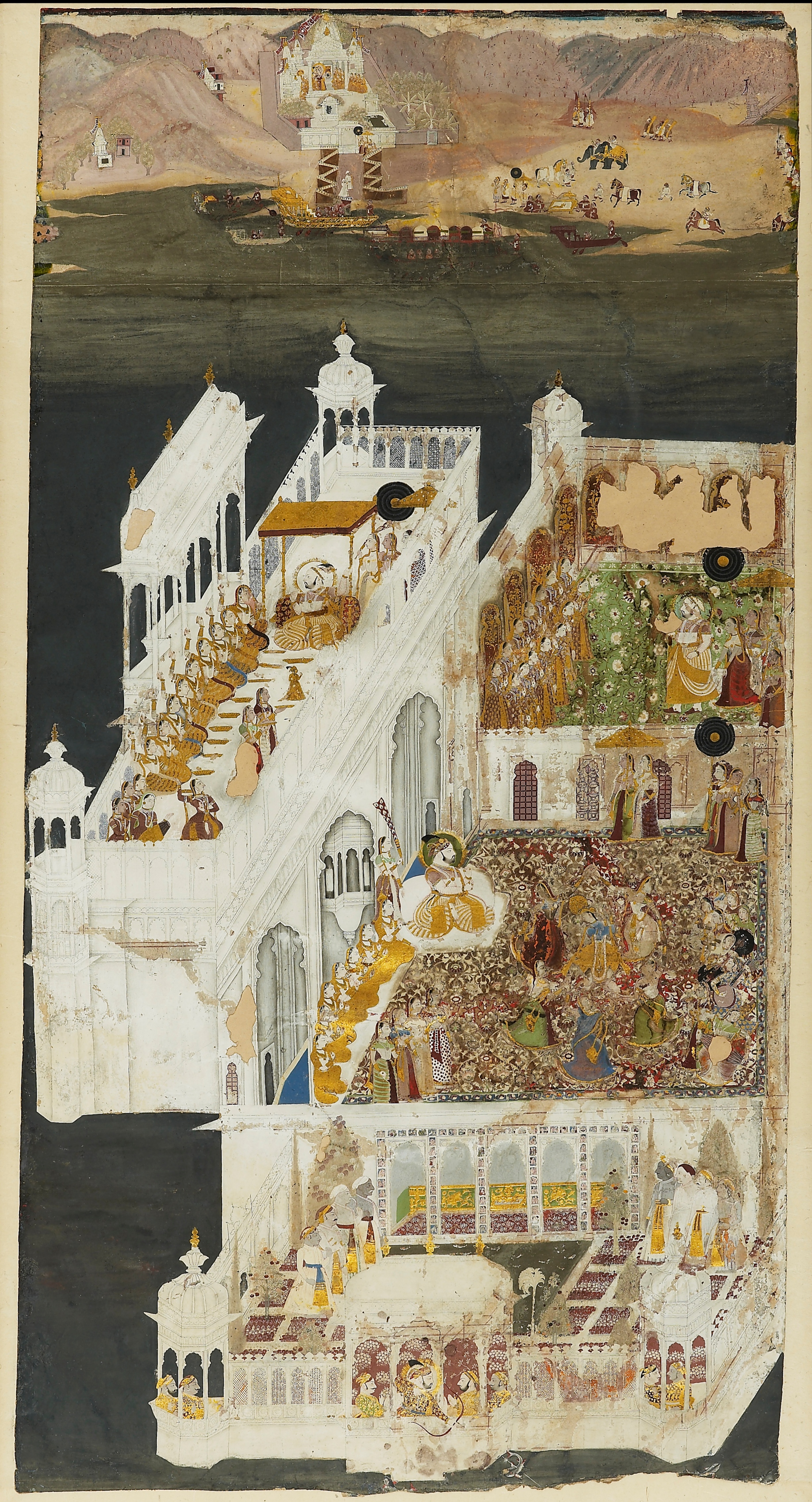 Here’s a short excerpt from the essay, Jagvilās: Pleasure and Power in 18th Century Udaipur Painting by Dipti Khera:

In the 18th century, poets and painters created alluring spectacles out of historical moments when the courtly elite gathered to enjoy multisensorial, artful pleasures. These gatherings were nowhere more vividly staged than in Udaipur in paintings—and in poetry—that depict the elite coming together in pleasure at the Jagniwas palace on Pichola lake. For example, painters Sukha and Syaji, in 1751, emphasised such collective aesthetic response with an image of Maharana Jagat Singh II (r. 1734-51) and the ladies of the court on the terrace of Jagniwas, raising their hands in the gesture of the dancers before them (see Fig. 1). The inscription on the painting’s verso describes it as a picture (pāno) of the likeness (surat) of Jagat Singh and of the mood or feel of Jagniwas (jaganivāsa ro bhāva), associating royal portraiture with pleasure and allying the fine arts through collective mood.

The Udaipur court poet, Nandram, composed the bhava of the lake-palace, Jagniwas in a 405-verse-long poem, Jagvilās, which commemorates the three-day inauguration ceremony and festivity that commenced on January 20, 1746; its opening verses highlight how the king was enthralled by a location in the middle of the lake for building the Jagniwas between the two standing water palaces.

Once upon a time, [while] enjoying a boat ride in the lake The whole community of courtiers enjoyed all forms of pleasures with the king Here he sees the Jalmandir [which they] admire, beautiful, delighting and well-decorated There is the illuminated Jagmandir, crown upon the entire earth. The site in between is the best of the best; [let’s] begin this [work] here One that wins over, enchants everyone, Jagat (the king and the whole world) himself delights every heart. (7)

Scholars have overlooked relationships between historical poetry and depictions of court life because the field traditionally separates portraiture from manuscript illustration, and painting from the other arts. ...

I elicit a different view of vilāsa, or courtly pleasure, from the 18th century poem, Jagvilās. Nandram, like other Sanskrit and Braj poets of historical-literary poetry, classicises pleasure by incorporating such aesthetic topoi of kingly praise as the nakh-śikh, head-to-toe description, and the nagara-varṇana, emotive descriptions of beautiful cities and plentiful settings that call upon ideal and real places alike.7 Rather than opting for an effect of documentary verisimilitude, Nandram describes the effect of the material experiences of marching horses on the lake-side and the shining drums in the boat procession that take the royal party to Jagniwas palace. We hear about the food, poetry and music enjoyed by the king, the visit of the royal women and princes on the day following the opening of the palace, and the king’s large-scale, political act of gift-giving performed at Jagniwas, including the names of nobles and poets, and details about the horses, gems, gold and robes they received. Nandram compares the king’s giving of gifts with the pace at which the water flows in the lakes of Udaipur, thereby creating affective metaphors particular to the local topographical environs.8 The poet thereby also praises Jagat Singh as a righteous king who fulfils dharma, or a socio-cosmic order, wherein water from the earth and the sky is the medium for transferring the gifts.9 Jagvilās may thus be translated as “Jagat Singh’s delights” or the “pleasures offered by Jagniwas” or the “jaga of vilāsa”, the “world of pleasure”, that the poet presents as an idealisation of real gatherings. I emphasise the dialectic between the real and ideal as central to constructing meaning in the allied arts in early modern India, and for understanding the historical appreciation of painted visions of pleasure.